Finally, a chance for some quality me-time and to catch a few extra Z’s!

However, as Georgia State University switched classes to online for the rest of the semester and internships were adjusted to be completed from home, it became clear that it could be quite a long time until things were back to normal. My routine had been thrown way off track and I had to make a conscious effort to establish a new routine and make a plan to keep from going crazy.

After a few days, I started setting an alarm again (though, admittedly later than my alarm pre-COVID19), making a daily to-do list, and (eventually) changing out of my pajamas. I even continued following the training schedule for the half-marathon I signed up for in the early summer - ignoring the fact that it, too, could be canceled.

My plan was to be as diligent as possible and get ahead on my schoolwork. I was glued to my desk. I brought my lunch to my computer. And all of this lasted a few short days, however, before my body and brain loudly protested.

So I decided to start taking an hour in the middle of my day for lunch and walk my dog, who is becoming both spoiled and fit with all the extra walks and runs. Even with the small adjustment of a single hour, I found my afternoons to be much more productive after giving my mind and body a break.

Getting through this will be a test in endurance, something I keep reminding myself.

As the life of a student goes, I often find myself working into the night. But interestingly, with less time spent commuting or doing other things out of the house, this has not been such a necessity. In “normal life” my partner and I get to spend very little time together, considering our busy schedules. So for the duration of the shelter in place order, we have made a pact to put work away by dinner and spend time together. Most nights, this ends up being a long drawn out dinner in the yard. It’s been lovely.

Admittedly, I have found I have had to make a conscious effort to switch out of the school mindset. There is always something else that can be worked on, or studied, or fretted over.

The conscious effort to set boundaries with my time, however, has been one of the most important for me. No matter how strange, or difficult, or stressful this whole thing can be, it is those human connections that will keep us grounded.

Social distancing has been weird and trying. Staying positive and well has taken a conscious effort. Though it hasn't been a seamless transition, taking shelter-in-place one day at a time has really helped me not become overwhelmed by all the unknowns the future holds.

This article was written by Aubrey Allred, Dietetic Intern and Graduate Student at Georgia State University. 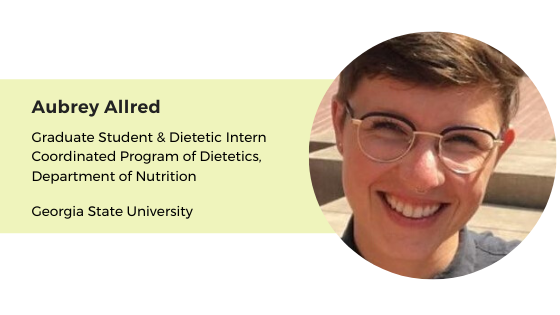